Improbable LLC Appoints Outside Managers for US Defense Business

Secretary Deborah Lee James served as the 23rd Secretary of the United States Air Force with responsibility for 660,000 military and civilian personnel and a budget of nearly $140 billion. Secretary James has deep expertise in strategic planning, risk management, public policy, cyber security, logistics and innovation. Secretary James has 15 years of executive experience in private industry. Most recently, she was the President of SAIC’s Technical and Engineering sector, a $2 billion, 8,700 person enterprise. Secretary James currently leads DLJames International LLC, a strategic advisory firm, and is a member of the Board of Directors of Textron Inc., Unisys, Systems and Technology Research, and LocatorX. She is on the Advisory Boards at Massachusetts Institute of Technology – Lincoln Laboratory and LeanIn.Org.

Dr. Michael Vickers’ federal service has spanned nearly four decades, serving in a variety of positions as a national security decision maker and intelligence community leader. In March 2011, Dr. Vickers assumed the responsibilities as Undersecretary of Defense for Intelligence; he was the longest-serving Undersecretary of Defense for Intelligence in the department’s history. Previously, he served as the department’s first and only Assistant Secretary of Defense for Special Operations/Low-Intensity & Interdependent Capabilities from July 2007 to March 2011, and Acting Undersecretary of Defense for Intelligence from January 2011 to March 2011. Dr. Vickers serves as a board member for BAE Systems, Fed Data Holdings, Metis Solutions, and Hermetic Solutions Group. He is the Chair of the Advisory Board for SAP National Security Services and an advisory board member of General Atomics & General Atomics Aeronautical Systems, Dataminr, Orbis Operations, Beacon Global Strategies, and Predata. Dr. Vickers also serves on Government advisory boards related to national security issues. 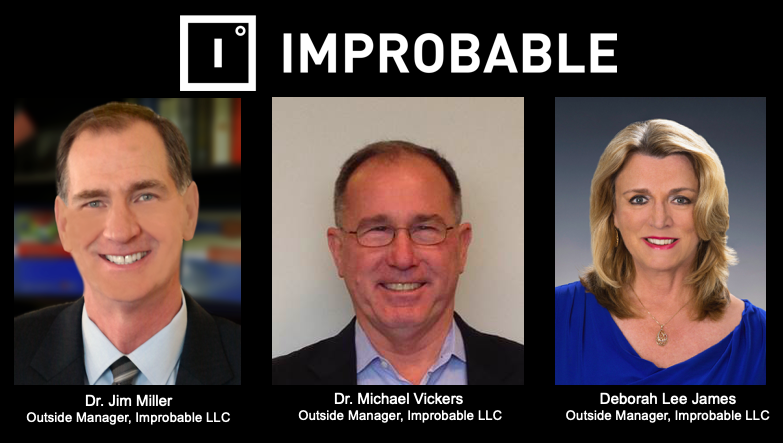 "We are thrilled to welcome such a highly respected group of defense experts to our Board with the appointment of Secretary James, Dr. Miller and Dr. Vickers,” said Joe Robinson. “Their expertise will guide our defense operations in the U.S., and ensure we are positioned to support all requirements of the U.S. Department of Defense.”

“Improbable enables an integration of modeling, simulation, artificial intelligence/machine learning and analytics to produce the most detailed and realistic synthetic environments ever conceived,” said Dr. Miller, Chair of the Board. “I’m excited to work with my colleagues to advise Improbable on how to provide unique value to the U.S. national security community by applying the revolutionary potential of Improbable’s technology for training, planning and decision support.”

Improbable LLC is a U.S. subsidiary of the London-based technology company, Improbable, and focused on serving the needs of the U.S. defense and national security community as an extension of Improbable’s global defense business. Creating combined synthetic environments for the benefit of the U.S. national security community, Improbable LLC aims to decrease the cost of preparedness while improving operational effectiveness.