News about Pokemon Go has been everywhere since release. Pokemon Go tries to make the childhood dreams of every 90’s kid come true, turning smartphone owners into trainers, and putting Pokemon into the real world. As you walk around city streets and scenic country lanes, the vibrant, dancing little monsters burst onto your smartphone screen, overlaid upon the camera view, and challenge you to nab them with a Pokeball.

These kinds of augmented reality experiences are not a new concept. Niantic, the company behind Pokemon Go, has released augmented reality games before. They are perhaps best known for Ingress, released in 2013; Ingress combined geolocation with the user’s view through their phone camera to provide an AR territory control experience, encouraging players to go out into the world and find notable locations to tag as portals to enable their side to dominate the Earth. In fact, the locations that Pokemon Go uses to place its gyms and Pokestops are none other than the crowd-sourced notable location data generated by Ingress players. 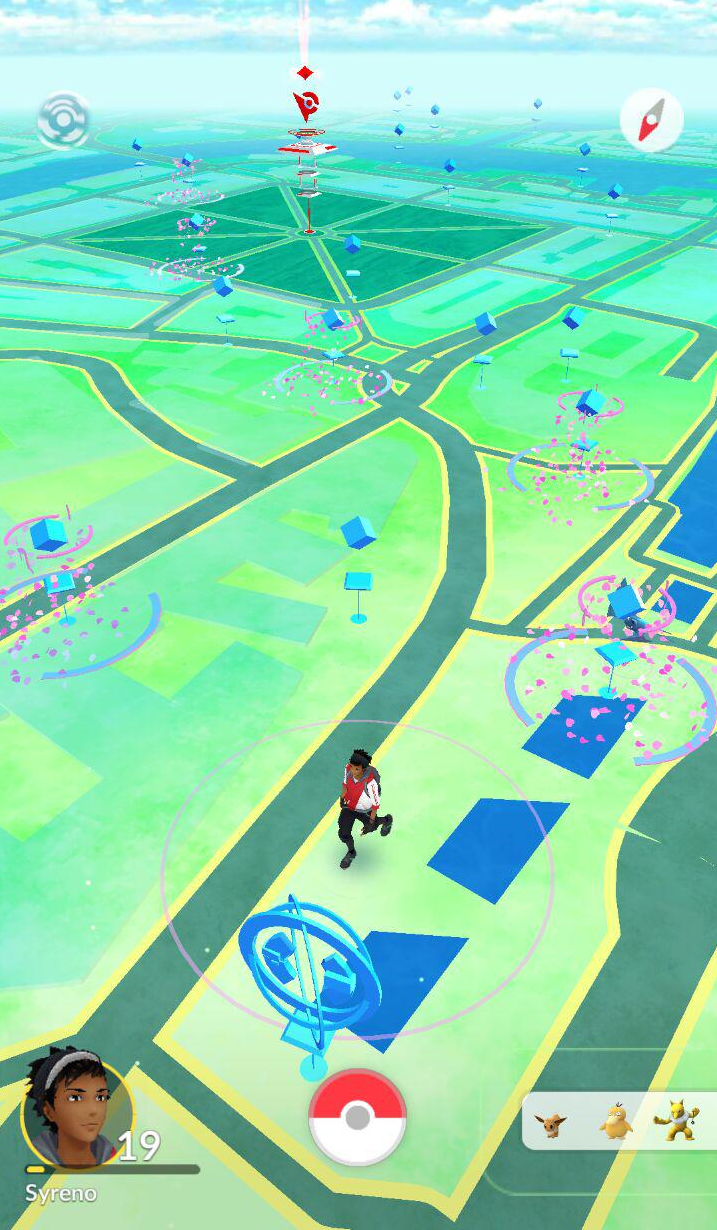 Crowd-sourced locations are not the only aspects of the real world Pokemon Go uses. The franchise is well-known for sprawling maps broken out into diverse areas and biomes, each attracting Pokemon with some affinity for the attributes of that area. Want to catch normal and grass types? Head out into the fields surrounding small towns. Want to catch water types? Where else do you go but the beach? Pokemon Go also exploits the local geography to create authentic habitats. Common, normal type Pokemon such as Pidgey and Rattata are likely to appear in your standard suburban streets during the day, Goldeen and friends do indeed appear near water sources, and the very brave can head out at night for a shot at Ghastly and other ghost type or shy Pokemon.

However, this is seemingly as far as Pokemon Go is able to take the exploitation of natural features. Many geographical factors don’t yet seem to have an effect on the appearance of particular Pokemon. We don’t yet find Fighting types at our local sports centre, and Pokemon are not persistent; they don’t grow, increase in strength or move and explore the world. Players aren’t rewarded by wild Pokemon given the time to grow by travelling further to untouched wilderness. But what if we could push the natural ecology of Pokemon further? What would a ‘realistic’ Pokemon ecology give players?

The Secret Lives of Pokemon

One of the awesome features of the handheld games is characters telling the player local legends of unique, powerful Pokemon. These creatures are seemingly one of a kind, confirmed sightings are rare, and their exact territories unknown. These notorious Pokemon intrigue and tease the player throughout the game, leading up to a final, all or nothing encounter with the legendary beasts. Pokemon Go players have theorised that rare and legendary Pokemon may spawn in unique natural areas, and it won’t be long until people are scaling mountains trying to catch a legendary bird. Some intrepid trainers have already kayaked out into a bay to conquer a gym. But as yet it’s unconfirmed whether Legendary Pokemon exist in the game, and whether they are confined to habitats as notable as their typical locations in the portable handheld Pokemon games. 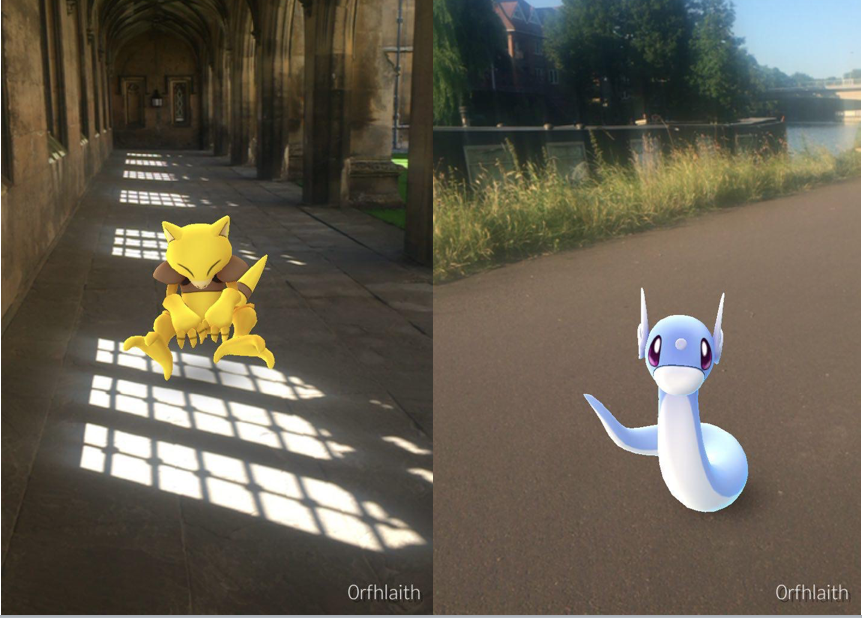 What if Pokemon had lives outside of their fleeting visits to our screens? Pokemon may inhabit an area and form territories and relationships with each other. A family group of Rattata guards its space aggressively against nearby Ekans, driving the predator out of the neighbourhood to protect their growing colony. A particularly lucky Pokemon has managed to escape several trainers, levelling up naturally as it survives in the wilderness, reaching higher combat power. It develops a reputation; have you heard about that local Charmander that no one can catch? It may evolve, develop as a local legend, the sort of Pokemon that visitors to the town hear whispers about on the bus and set out determinedly to find and catch.

Wild animals don’t just remain in one place. They have habits and routines. These ideas, combined with the persistent lives of Pokemon, could create new opportunities for players. Several bird-type Pokemon are noted in the lore to migrate; the arrival of Summer in one part of the world could bring on the arrival of huge flocks of bird Pokemon not seen the rest of the year, leading to seasonal events. Seasonality could affect the appearance of Pokemon with a preference for hot and cold. Behaviours on a more local scale are also possible, with herds of Tauros moving to water sources for a drink at the heat of midday, for example. Pokemon could also respond to player actions. A large amount of trainers converging on one area may prompt Pokemon to find safety elsewhere, leaving the area empty. 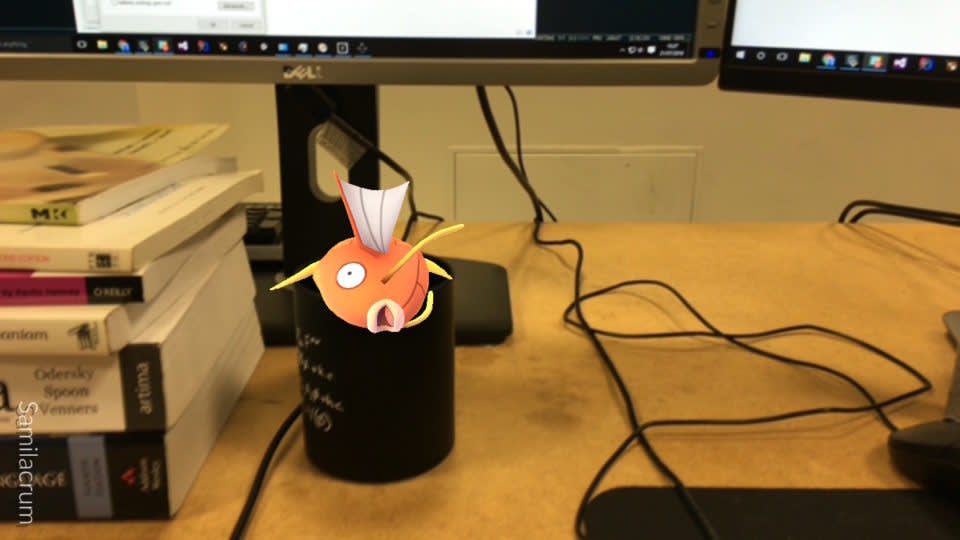 These sorts of opportunities add more than just interesting and natural wildlife behaviours. They add possibilities for local collaboration. Go to a new town on holiday, or visit a friend, and you can meet up with and talk to local trainers to learn about the habits and stomping grounds of the local Pokemon. What is common in this area that is not common in your own, where do large groups of Pokemon go during the day, and where do they hide during the night? It adds new possibilities and depths to player interactions, and also a new edge to the team dynamic. Players in Pokemon Go align themselves to teams who compete for control of the local gyms. One gym may hold the knowledge to the habitats of particularly powerful or rare Pokemon they withhold from members of the other team, and use that knowledge to dominate the town.