Back in the mists of time, our engineers participated in an internal playtest of Worlds Adrift, the upcoming game by Bossa Studios. These are the real stories of their first experiences in the game world, as told by the players themselves.

It turned out they had very good aim with their crossbows.

I jumped on this guy’s ship before he took off, he seemed happy to have me along. We barely made it to the next island where we then ran out of fuel. We left the ship to harvest fuel. I ended up getting 13 units or something, refuelled the ship, and took the helm. I definitely only intended to just land the ship on the island since it was floating pretty high up.

Halfway to the next island, I ran out of fuel. Luckily, the last island was really tall, so by diving off the ship I managed to reach the very bottom and slowly climbed up. At the top, I found a well equipped and angry traveller! He had made a friend on that island too, and it turned out they had very good aim with their crossbows.

“I don’t exactly know why”

I had a lot of fun in this playtest. I didn’t really interact very much with any other players, mostly because I was planning on building a Behemoth. I actually enjoyed the mineral hunt for 170 metal of the same kind – partly because your inventory is too small to actually hold all of the metal, so I had to build a chest somewhere to store my materials, which was quite exciting because I had to find a good hiding place for it that nobody would find. 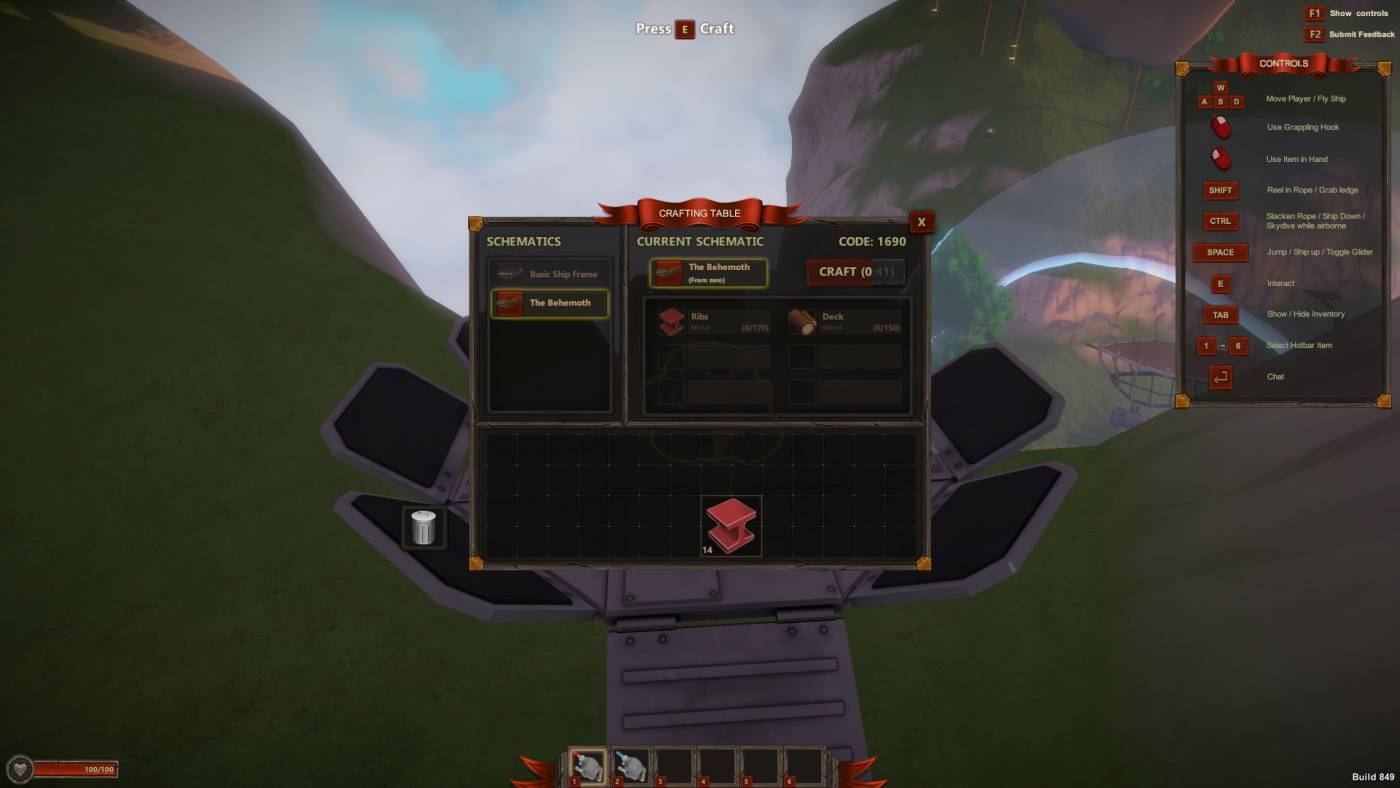 After a lot of time and effort, I ended up building my Behemoth, but ended up being too lazy to craft the expensive engines and wings so I just went with the standard ones. I don’t exactly know why, but around 5 seconds after launch my ship started losing height and crashed miserably into the ground near my base, much to the hilarity of everybody else watching me play at the office, because I had spent like 90 minutes building the thing. 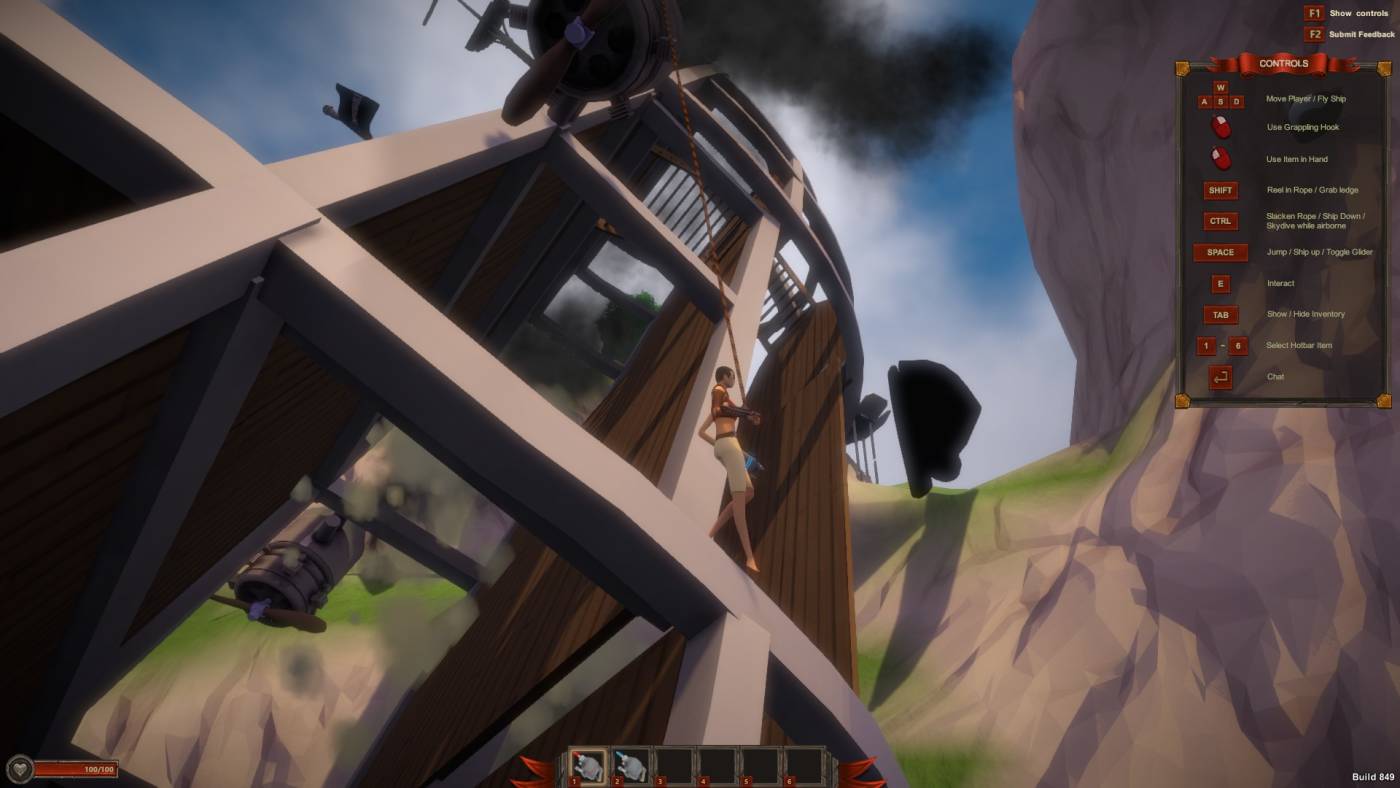 Unfortunately I accidentally started the first engine of my second ship before attaching the other engine, which led to it undocking and going on a short lived journey down into oblivion, taking the chest with all my resources with it.

I ended up gathering a ton more resources to build a third ship and retry, but the playtest ended right as I was launching that one. 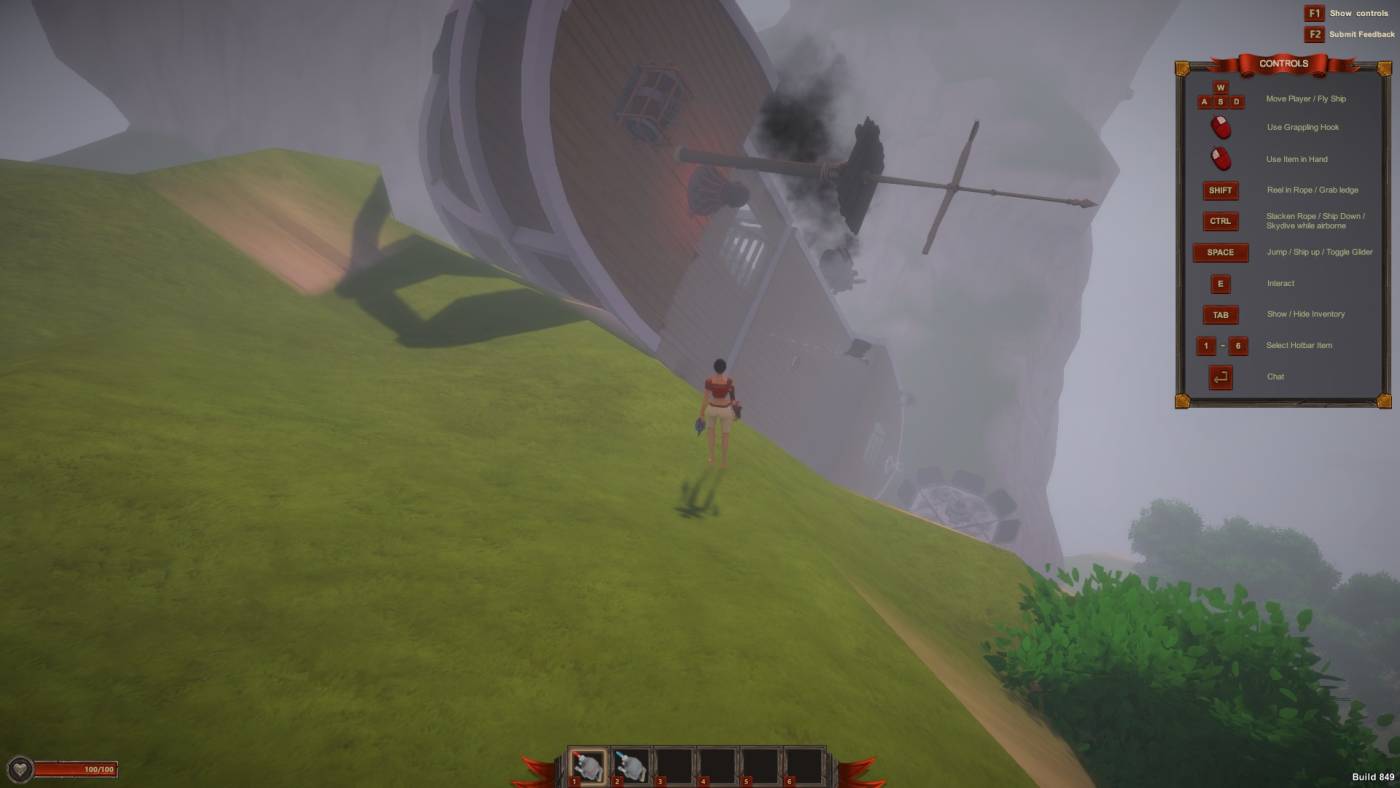 I was able to troll many players who had painstakingly built ships by either stealing them or salvaging their components. This was great fun. However, it seemed to annoy players. One player used the chat system to relay a ‘f you*’ after I stole his ship and nose dived into the ground, ruining his work.

The same player then advised another group of players to ‘avoid Moses’ and to ‘not let him steal your ship’ after I respawned on his island again. The player then crafted a crossbow and crossbow bolts after I stole his next ship, and proceeded to kill me to death.

I crafted nothing, chopped a couple of trees and generally did no manual labour, but had a lot of fun at other people’s expense.

We were four people on a ship and we noticed that we can affect the tilt of the ship by hanging from it. We had a little bit of fun with that and the ship ended up upside-down. 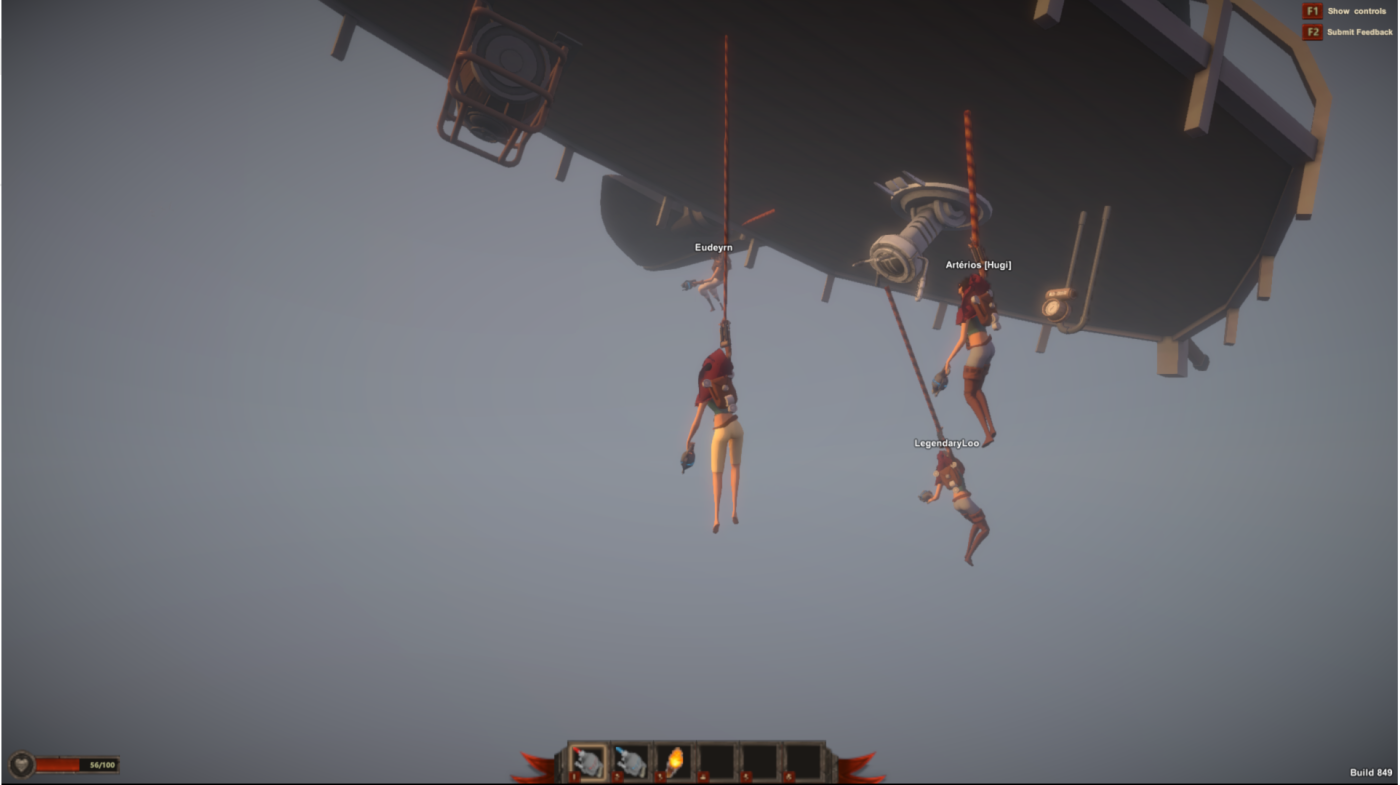 I spawned inside a temple. I had no idea what was going on, who I was, where I was going. That’s when Basti appeared. Basti gave me a meaning. He immediately grappled to the ceiling and left, without exchanging a word. I later followed suit and started exploring the world. I saw other people were pointing lasers at things repeatedly and quickly learned that’s how you got resources in this world. One thing led to another, and I had a wing suit, I had clothing, I had a flare gun with ammo.

For the first time in my life, I finally had a place I could call home.

I decided it was time I built a ship. One component at a time, I started building it up, each time feeling the rush as it slowly moulded itself to life. I built my first respawner on the ship – for the first time in my life, I finally had a place I could call home.

On my hunt for more resources, my grapple failed me and I plummeted to my death. No worries – I had my spawner. Or so I thought. I forgot to ‘activate’ it. Ah well, lesson learned. I went up to it to activate it, only to find someone else had activated it: Izzi.

Izzi had taken my home. I decided not to hold a grudge. Maybe Izzi had stumbled on it by accident. I just built another one, next to Izzi’s.

That’s when I found him again, Basti. Basti and I were super stoked about the whole thing and he started helping make a ship. We gathered resources, subdivided tasks. Along the way we met others, such as Greenlizard, but these bonds were more ephemeral and mostly ended up in them throwing themselves off the island. 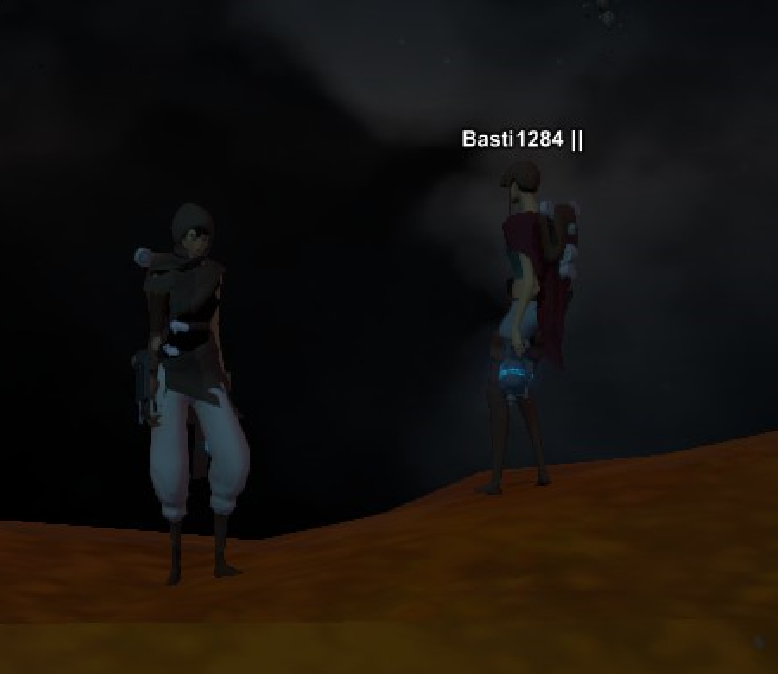 That’s when we finally met Izzi. Izzi was seen near my shipyard, jumping around and trying to salvage things. I sent out tokens of friendship and for a while everything was cool… until Izzi betrayed us and started trying to murder Basti and myself. The betrayal stung, especially because I thought having respawners next to each other meant something. Evidently it didn’t, because Izzi was a psychopath.

We exchanged stories about how much of a psychopath Izzi was

Basti and I separated ways due to the escape after the great betrayal. I tried to find him endlessly, but every time I thought I had, it was instead Izzi pretending to be Basti, hunting me down to try and kill me. Izzi did this because Izzi was a psychopath.

Two long day/night cycles had passed. I had a lot of resources at this point, all ready to be used to build the dream ship. That’s when I saw him again. Basti.

We exchanged stories about how much of a psychopath Izzi was. Apparently, Izzi ended his/her life by creating a ship and crashing it into the island. Izzi’s such a weirdo.

Anyways, we built an amazing ship and poetically sailed it into the sunset as the server told us it was going to shut down. Fin. 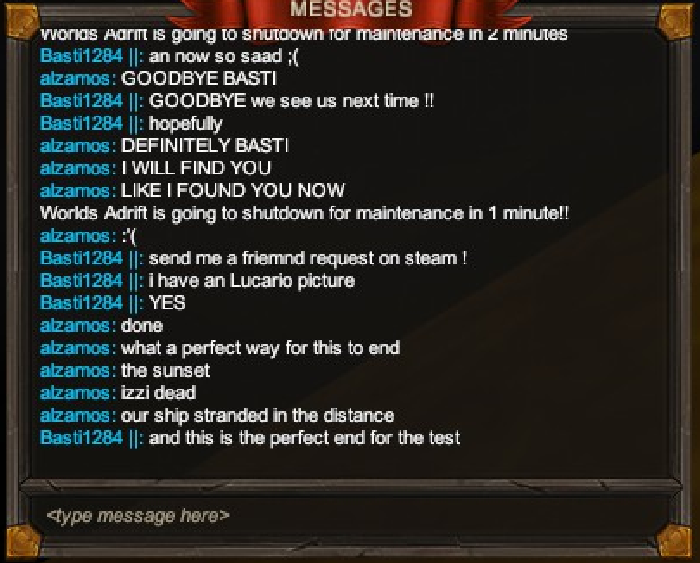